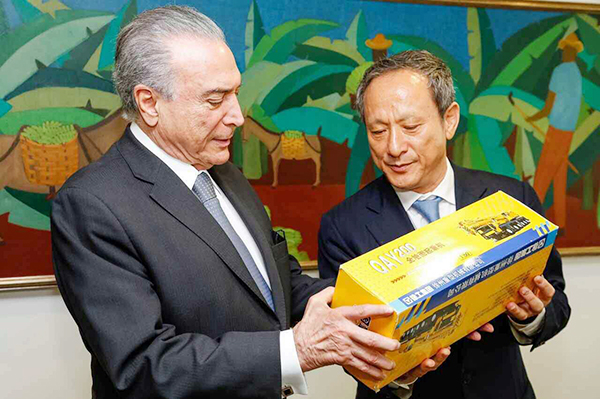 10:30 am, in the presidential palace in Brasilia, President Temer warm welcome to meet Wang Min, chairman and his party. President Temer said happily: This was the second meeting with MR.Wang after the G20 summit in Hangzhou, China. He said: China's long-term economic growth will remain at a high level, providing useful experience for the world. The summit can bring "Chinese example" to more countries, is in the recovery period of the Brazilian economy more in need of Chinese experience.
President Merkel expressed appreciation for XCMG's investment in Brazil and its contribution to local economic development. He said that the achievements made by XCMG in Brazil have served as a good example for more Chinese enterprises wishing to invest in Brazil. effect.
Chairman Wang introduced to the President XCMG Group took root in Brazil, the radiation of South America's strategic layout and adhere to the Brazilian economic downturn. President Tremor affirmed XCMG's confidence in Brazil.
After the meeting, Chairman Wang Min presented XCMG crane model to President Temer, and invited Mr. President to visit XCMG Brazil Cable & Cable Plant at the right time. President Tremor is pleased to accept the invitation.
Subsequently, the Office of the President of the Information Office of Chairman Wang Min had an exclusive interview.