As the originator of China kiloton crane, XCMG has a brilliant record! Since XCMG kiloton crane 2012 put to practical construction applications since, a total of more than 20 kiloton fought in Fujian, Guangzhou, Yunnan, Inner Mongolia, Shanxi and other areas of wind power projects, completed a total of more than 1,600 2MW wind turbine lifting, lifting process powerful lifting strength and perfect performance, winning high praise from the construction side.
This is 800 tons, we will certainly fulfill our mission!
June 18, 2016, formed the gray dawn sky just, with XCMG owner Mr. Liu first came to the team installed Chifeng City, Inner Mongolia, a large wind farm, will be staged here in a large wind power lifting. 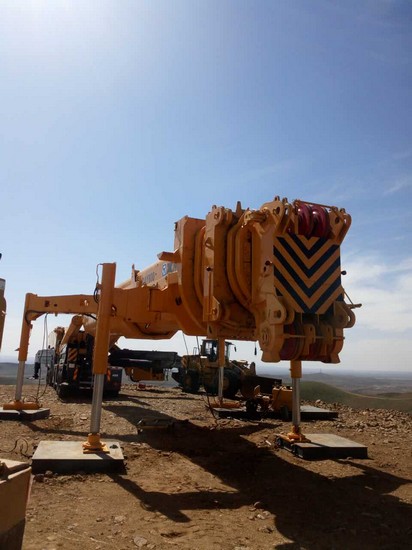 The way to play it cool rhythm from the start
Just two days before the next heavy rain the road was very clean, but on the way to the construction site to the hills only a dirt road about 4 meters, there are more than 50 different levels of high and low hills to climb by 30 km width, this mountain It is the average car is not good to go, not to mention the length of 19 meters and weighs 90 tons big guy.
Under the guidance of XCMG service engineer at the throttle of the driver would instantly feel the power surging QAY800 engine, on the way to the battlefield, the driver to easily use a variety of electro-hydraulic control of steering modes: highway, small turning, crab and other steering mode, there is no cannot reach the site, there is no cannot go beyond the steep slope. "Would go so easily, little suited to small," joked the driver.

Assembly of large tonnage is so cool 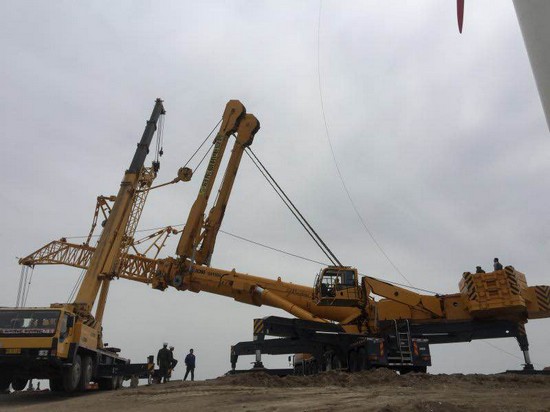 Liu said the owner, then this project, he is still some concern, the scene of the environment really is not ideal, XCMG cranes is good, but such a monster, in such a confined space to assemble it, probably not more smoothly , but beside him XCMG first team installed, these day and night, dedicated workers Xu, let him full reassured.
Wind wind blew a little blinded site, construction workers braved strong winds, with the assistance XCMG first installation services team methodically installed boom, ultra-play, legs, "advanced self-assembly technique is not our province less time, but did not expect that, but also saves the cost of an auxiliary crane, "the owner said Liu in a good mood.
Accurate, safe, 33 sets of lifting flourish 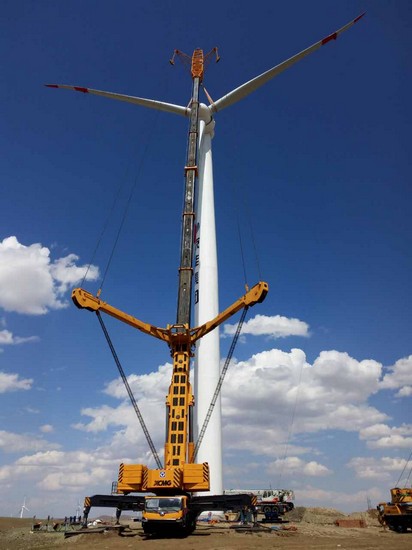 The first crane, XCMG QAY800 using 84 m main boom plus 16 m super condition Qigong dedicated wind power arm head, weighing 65 tons nose firmly butt in high winds up to 85 meters in the base of the tower, bolts registration is successful, the success of the release cable; then, up to 40 meter blades again have no doubt that Enron seating
Followed by three days in a row and installed two 2.0 MW wind turbine, the process of carrying over 800 tons from the transition climb up the steep mountain of nearly 40%. It is said that the hill there are 33 sets of fans waiting for the installation of these, no doubt, 800 tons of super transitions capability, and excellent lifting performance, will certainly play an active role in this wind! 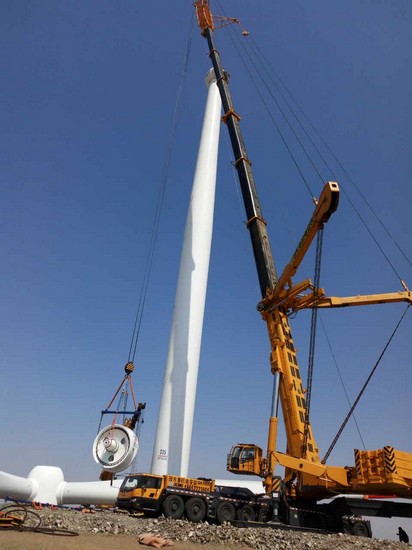