XCMG all terrain cranes battle in the German market

Germany - the world's industrial powerhouse, the world's largest all-terrain crane market, has the most stringent market access procedures and technical standards, and the overseas lifting industry giants compete for the most intense markets.

When "Germany" "Ruhr" "XCMG crane," these key words together will collide what kind of spark?

After nearly a month of intensive tests and tests by German customers, the XCMG crane XCA100_E has won the trust of customers with its excellent safety protection and smooth movement, and welcomed the project to enter the construction of ChemparkMarl in Germany's largest chemical park .

Xicheng XCA100E into the chemical park in the early hours when ready, all kinds of people cast around from time to time curious gaze and asked cast, "I have never seen this car?" "Hey, Danies, when did you learn to open China "Wow, how is the cab like a car, with a LED display, it's never been there!" "This car looks good and will look after you when it's time to work!"

"Extending the leg, pad supporting the foot plate, articulated counterweight, automatic planning of working conditions, automatic mode stretching ..." German operator Krickhann skillfully completed the XCM100_E XCM100 hoisting preparation work, oversaw the chemical The park safety engineer began to turn left and right about the crane and looked up and down. As a result, all XCMG vehicle inspection projects passed all the time.

Demolition and installation around the densely packed chemical tanks is like "surgery" in a blood-clothed human body that can damage the delicate "nerve" and "blood" networks around the reaction canister. With a good lifting operation of micro-mobility, complex action and stability of the system stability, XCM100_E boom system such as scalpel generally accurate and rapid completion of the reaction tank demolition of various components.

2. Almighty warriors, dancing in Germany between the city of "bike" and "Ruhr black mire"

Münster - an important city in northern North Rhine-Westphalia, Germany, is known for its popularization of universities and bicycles. The construction site is located 100 kilometers away from the client company. According to the customers' usual practice, the installation of the medium-sized tower crane will last for two days. 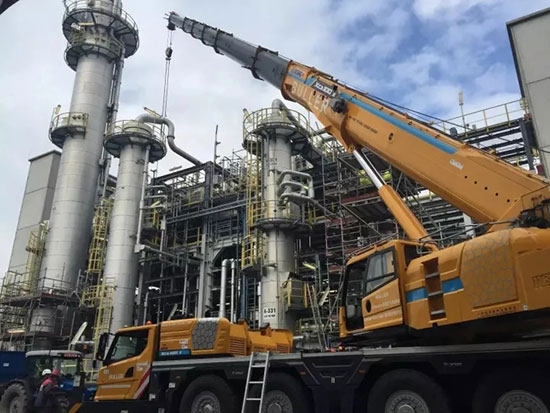 Dimin Meng bright, XCMG XCA100_E has been ready for entry ... ... just as workers are ready to start each time, the driver temporarily found the site length of the job site, width are not enough, can not be adjusted body ...

How to do? XCMG XCA100_E has a relatively compact size in the world 4 Bridge 100 tons of products. "Wedge-shaped walk, full-bridge steering, small turn mode switch ... ..." German drivers constantly changing the body position, there is a large stone pier on the road blocked access. It does not matter, XCMG vehicle cab design play a big role in the small details, our foot pedal can also be folded!