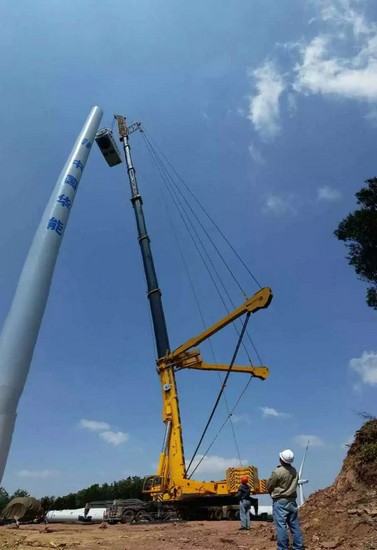 Surrender Taiwan QAY1000 all terrain crane in 2012 put into practical application since, a total of including the world's largest XCA5000 including 16 XCMG kiloton crane fought Fujian, Guangzhou, Yunnan, Inner Mongolia, Shanxi and other areas of wind power projects, completed a total of more than 1,600 Taiwan install more than 2 MW wind turbine, the industry has won high praise.
Accumulate, achievements big country weighing equipment. With the 2002 birth of the first 25 tons all terrain crane QAY25 of XCMG all terrain crane has been in the field fighting for 14 years. Every innovation, every beyond, every lead is Xu workers and the depth of integration of user crystallization, are all to the actual needs of users and the goal to achieve fruitful results, XCMG kiloton all-terrain crane is in this context born.
May 13, 2016, the border of the south of a high-altitude wind farm, I saw, QAY1000 XCMG all terrain crane from the use of advanced technology and proprietary removable power unit system, removable hinge axis point system, without the assistance of the condition, a very short time to complete the self-assembled and began to work.
The wind farm is over 3000 meters above sea level, QAY1000 use of wind power dedicated arm head plus ultra status of Qigong, first base diameter of 22 meters weighs 68 tons tower in high winds firmly docked on the base, "bolt alignment is successful, release cable success! "and the second, three towers at the site more than once a commander loud sound broadcast successively safely seated. Lifting whole process at one go, like an elaborate stage show, the scene of construction workers are invariably applaud.