In many people's eyes, Brunei quite mysterious. Benefiting from the successive discovery of oil and gas fields in the past century, this pocket-sized country with a population of just 420,000 and an area equivalent to Shanghai is now a wealthy oil kingdom whose per capita income ranks second in the ASEAN countries. However, Brunei's economy, like those in the Middle East hit by oil-rich countries, has also been hit hard by plummeting oil prices. Brunei is being forced to pursue its "economic diversification" strategy under harsh challenges. China's "One Belt and One Road" initiative came right at the right time, providing Brunei with an opportunity for economic development. Now, Brunei is attracting more and more Chinese-funded enterprises to invest and start their own businesses.

In 2016, Brunei's largest sea-crossing bridge, the Mora Bridge, was formally started construction. In the equipment procurement bidding for this project, XCMG gave full play to domestic and foreign double-sided advantages and won the bid for Brunei Darussalam Bridge project , Won all the construction machinery products for the project. 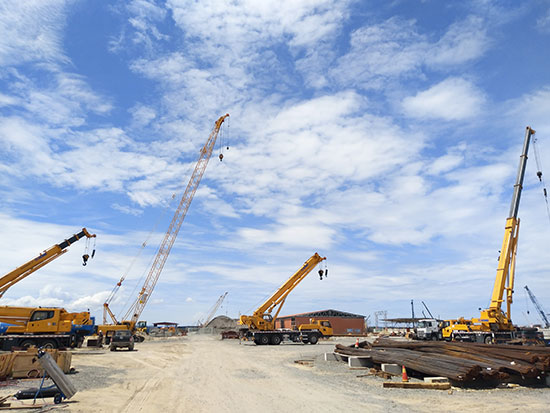 This year, Brunei's PMB petrochemical project, which was included in the "One Belt and Road Initiative"'s first batch of key projects, was officially launched. The project invested a total of only 3.45 billion U.S. dollars in the first phase of the project. Recently, the project has started construction, including cranes, crawler cranes, including more than 30 XCMG crane equipment busy throughout all corners. According to the person in charge of the project, the project will enter the intensive construction phase next year. XCMG is the first crane of 4000-ton crawler crane in the world that is expected to take part in the project construction next year.

XCMG actively seized the opportunity of "One Belt and One Road", utilized its own brand and product advantages, closely contacted Chinese-funded companies and local partners to cultivate detailed plans and formulated targeted sales and service policies based on the local market characteristics so as to gradually improve the market sales in Brunei Service Network. In the next five years, Brunei will become one of XCMG's key markets in Southeast Asia. XCMG crane with high-quality products and improve its services to become the preferred brand of construction companies in Brunei.